Hillary Clinton and the Case of Shahram Amiri

According to the Daily Beast, Iran confirmed that it executed Shahram Amiri, an Iranian nuclear scientist who reportedly gave intelligence to the United States about Iran’s nuclear program. The AP reports that Amiri defected to the United States around 2009 and then returned to Iran in 2010 to a hero’s welcome after he claimed that the US had abducted him.

It turns out that Amiri was obliquely referenced in e-mails exchanged between Hillary Clinton and one of her top aides, Jake Sullivan. And those e-mails made it reasonably clear that Amiri was operating under his own volition. Once the Iranians found that out, there was little question what would come next. And it did.

As students of world politics are aware, Iran has a particularly brutal way of carrying out executions. Unlike everywhere else in the world where hanging breaks the condemned prisoner’s neck and kills quickly, the Iranians use the “short drop” method. The condemned prisoner is placed standing on a stool under the gallows with a noose around his neck. His hands are tied behind his back. The stool is kicked away and the prisoner is left to strangle for 10 to 20 minutes until he finally dies.

Congratulations Secretary Clinton for safeguarding top-secret US information on your private server. It shouldn’t take much imagination to realize that recruiting foreign informants and spies for a Clinton Administration just got that much more difficult.

Hillary Clinton insists she didn’t lie when she claimed that James Comey vouched for the truthfulness of her e-mail testimony. She merely “short-circuited”. Leave aside the eight lies Comey specifically identified. She now claims she was referring not to her Congressional testimony which was public and under oath; she was actually referring to her testimony before the FBI which was not public, not given under oath, and for which there is no transcript. Good thing that’s cleared up.

The Progressive Assault on the Bill of Rights Continues

Led by the New York Times and Elizabeth Warren, progressives are now attacking think tanks because – horror of horrors – they (or at least some) get funding from corporations. (Somehow union funding is sacrosanct). Anyway, the argument is that corporate funding for research produces suspect results. Here, for instance, is Elizabeth Warren on the subject.

If we are to assume, as Warren apparently does, that researchers’ conclusions are tailored to meet the objectives of funders, what are we to think of researchers who receive grants from government agencies? After all, governments spend an awful lot of money funding research. According to Issues in Science and Technology, “…Non-defense R&D settled down by the middle of the 1970s to make up roughly 10% of the domestic non-discretionary budget, and there it has stayed for almost 40 years…during both Republican and Democratic administrations and Congresses….”

Are we to assume that researchers who receive some (any) corporate funding are dishonest, but that somehow researchers who get government grants are as pure as the driven snow? If so, why? And who will be the arbiter of what constitutes quality research? We currently have in place a system of peer review, transparency, refereed journals, and reputation. It’s not perfect; nothing ever is.

The progressive solution to the imaginary problem of corporate funding of policy research is to attack the first amendment rights of those who disagree with polite opinion by using a process of intimidation. For example, the Times notes that “…a group of Democratic state attorney’s general is investigating whether Exxon Mobil worked with certain think tanks in past decades to ‘cover up’ its understanding of fossil fuels’ impact on climate change, in part by financing reports questioning the science, a suggestion the company rejects.”

So the party of science wants to use the police power of the state to stifle the speech rights of scientists of who disagree with them.

To be sure scientists do complain about a lack of government funding for Research and Development, and certainly corporate R&D funding has been on the rise in both relative and absolute terms. That, by the way, is all to the good. It is called investment. And let’s acknowledge that there is pressure on government R&D budgets, just as there is in all discretionary spending. And to some degree corporate spending may be closing a gap stemming from a fall off in government’s discretionary spending. 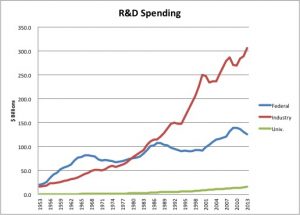 But we should be clear why there is such pressure on discretionary spending. It is because of runaway entitlement spending of the sort championed by—Senator Elizabeth Warren.

(More R&D spending data is available at this link.)

Which brings us back to another question for Saint Elizabeth of Massachusetts. If she is so concerned about the corrupting influence of money in politics, why is she silent about the hundreds of millions of dollars the Clintons’ have hoovered up from some of the most repressive regimes on earth?

We are waiting for an answer, Senator.