Jill Stein, the left wing hero who is leading the Presidential vote recount effort, weighed in on the demise of “El Comandante” Fidel Castro. “Fidel Castro” she said “was a symbol of the struggle for justice in the shadow of empire. Presente!”

Fidel’s favorite tool in the “struggle for justice” was mass execution by firing squad without benefit of trial. He routinely employed torture and long prison terms to silence regime critics, and his government relied on neighbors spying on each other to divide families and friends and destroy civil society. That’s when he wasn’t busy urging Nikita Khrushchev to launch a nuclear strike against the United States.

There is a reason why Lenin referred to people like Jill Stein as useful idiots.

And Speaking of Recounts

Without the benefit of evidence, President-elect Donald J. Trump has asserted that except for millions of votes cast illegally for Hillary Clinton, he would have won the popular vote. That is obviously flat out nonsense. Tellingly, Mr. Trump appears to be unaware that he is actually undermining his own electoral victory by claiming that the election he won was riddled with fraud. By doing so he gives cover to Jill Stein’s preposterous recount exercise.

Trump has chosen school choice advocate Betsy Devos to be his Secretary of Education. Needless to say the teachers unions are apoplectic. That’s an excellent sign. 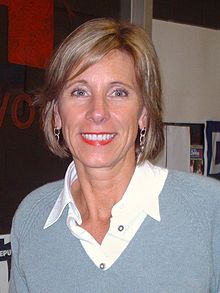 For decades DeVos and her husband have worked as school reformers, starting in her home state, Michigan, where they helped enact that state’s Charter School law. They have also successfully backed state and local candidates across the nation who are school choice advocates. School choice is something DeVos views broadly, encompassing vouchers, tax credits, charter schools, magnet schools and homeschooling.

With the performance gap as wide as it is between suburban and inner city schools, and between white and minority students, it would be reasonable to expect school performance to be a civil rights issue. After all there is strong support for school choice in minority and low-income neighborhoods, although opinion is closely divided in middle class white suburbs. And if there is one thing that economics tells us over and over again, it is that competition produces better outcomes for consumers.

So it is dismaying that the civil rights establishment has thrown its lot in with the teachers unions rather than minority neighborhoods. As reported in The Daily Beast, the NAACP along with the usual assortment of social justice groups came out with a call for a moratorium on charter schools and efforts to finance alternatives to traditional public schools. The NAACP analysis in the publication “Cloaking Inequality” is available at this link.

Who knows, maybe libertarians and conservatives will be able to shape policy to actually reform our dysfunctional public schools so there really will be opportunity for all. In the meantime, progressives can continue to argue about the equities of school locker room use.