The Teacher’s Unions launched an all-out blitz against Betsy DeVos, Donald Trump’s nominee to be Secretary of Education. In the end she was confirmed, but just barely. After 2 Republicans and all Democratic Senators voted against her, it took the vote of Vice President Mike Pence to break the tie and put her over the top 51 – 50.

The hysteria over the DeVos nomination was evident in the Senate debate in the opening statement made by Senator Patty Murray (Washington, D) Ranking Member of the Senate’s Health, Education, Labor and Pensions Committee. Senator Murray rose as she put it “to strongly oppose Betsy DeVos and her plan to privatize public schools and destroy public education in America.” That gem, Trumpian in its subtlety and nuance, can be seen at about 17 seconds into her opening statement, shown in the video below.

Senator Murray probably didn’t come up with that one all by herself. Her puppet masters, the Teachers Unions did. Listen to Randi Weingarten, President of the American Federation of Teachers. She said that “In nominating DeVos Trump makes it loud and clear that his education policy will focus on privatizing, defunding and destroying public education in America”.

What Senator Murray is actually complaining about is the fact that Betsy DeVos is an ardent champion of charter schools and using vouchers to give parents the power of choice in the education marketplace. Not only that, she has actually spent her own money to promote the idea. But Senator Murray, who attended St. Brendan’s Catholic School and who routinely describes herself as “pro-choice” is bound and determined to prevent parents from exercising choice in their children’s education.

Let’s understand the politics here. There is a furious battle to define the issue because (leaving aside vested interests) polling data indicate that while the public (and especially minorities) tends to look favorably on school choice, the support is soft, and often dependent on how polling questions are worded. That said, there is a reason why reactionary liberals, of which Murray is one, resist any and all efforts to reform public schools. For them it has nothing to do with students. Public schools are a jobs program for a special interest group that showers them with campaign money and campaign workers.

And so at all costs, they resist experimentation and defend failure. Statistics published by the OECD and the National Assessment of Education Progress (NAEP) show the abysmal results coming out of the public school system. Among the 34 countries of the OECD the U.S. is about average in reading. But in mathematics, it ranks 27th while spending more than most. The OECD found that “Students in the United States have a particular weakness in performing mathematics tasks with higher cognitive demands, such as taking real-world situations, translating them into mathematical terms, and interpreting mathematical aspects in real-world problems.” But, “Students in the U.S. are largely satisfied with their school and view teacher-student relations positively”. In other words they are perfectly happy to be mediocre at best. 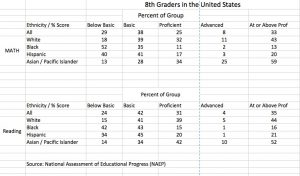 Let’s cut to the chase. Does anybody seriously think that the public schools are serving minority students well when only 13% of black 8th graders are at or above proficiency in mathematics? And without the rigors of competition to replace union rules why would anyone expect this unconscionable state of affairs to change? The answer is, it won’t.

Upper class and upper middle class parents regardless of race do not face the same problem getting an education for their kids. They have the wherewithal to send their kids to private schools. As a result, public schools in well-to-do districts actually face real competition, which is one, but only one reason why schools in wealthy areas perform better. In addition, good schools are capitalized into housing prices, putting those schools out of reach for low-income families who can’t afford to buy homes in wealthy neighborhoods. They are effectively trapped in failing schools without a way out.

This tendency, and its racial effects, was recently emphasized in a study published by the New School in New York’s Greenwich Village. The study found that more than half of the city’s public schools are more than 90% black and Latino. The study’s authors attribute this level of segregation to the tendency of wealthy parents to “vote with their feet”. Rather than risk sending their kids to a neighborhood school with a history of low test scores, they opt to send their kids to private and charter schools. So conventional public schools are abandoned and wind up being islands of academic failure, largely for poor and minority kids.

Educational opportunity ought to be the Civil Rights battle of the early 21st century. But it, like just about everything else, seems to have become a partisan issue, although it remains true that people from across the ideological spectrum have favored different forms of school choice. Milton Friedman the famous libertarian economist was an ardent proponent of school vouchers. Eva Moskowitz, a liberal Democrat, is a strong proponent of Charter Schools. Governor Andrew Cuomo has sided with Moskowitz against Mayor Bill DeBlasio in Charter School political battles.

School choice is not a panacea. There are no panaceas. But there is evidence that strongly suggests that well-run charter and private schools produce results that are measurably better than public schools at statistically significant levels in poor areas. What is beyond serious dispute is that public schools, in poor areas without effective competition, have produced failure. And there is no incentive for them to improve. It is unconscionable that is allowed to continue and that politicians go on protect failing schools by resisting experimentation and innovation. 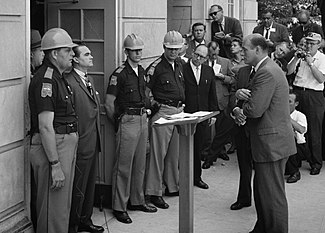 une 11, 1963, George Wallace, the Governor of Alabama, stood in the school house door at Foster Auditorium at the University of Alabama to try to block the entry of two black students, Vivian Malone and James Hood. Wallace’s was a forlorn attempt to keep his campaign pledge of “segregation now, segregation tomorrow, segregation forever”.

Perhaps that is about to end.