As the salutation suggests, this post is coming from Hawaii, where we have been living these last three weeks. Thanks to the wonders of Airbnb we rented a cottage in Maui near Makawao, a little cowboy town planted in what the locals refer to as the “up country”. The scenery is gorgeous; not only that, we are a short 20-minute drive to some spectacular beaches. For entertainment we take in the local sights, which among other things included going to a Luau, watching hula dancers and downing a Mai Tai or two.

Best of all, we don’t have any television in the cottage. Which means that we are not constantly being bombarded by either the latest Trumpism or histrionics of “The Resistance”. Quite a relief since we are smack in the middle of Progressive territory. In a lot of ways, Makawao is like Greenwich Village in the 1970s, but with way more Tattoos. A couple of towns over in LaHaina there is a Tattoo parlor named Spikes that actually broadcasts radio ads with voice-overs by Dustin Hoffman and Gene Simmons (of Kiss). Still not tempting.

There are plenty of Village Voice style hand out newspapers that carry stories about the state of “The Resistance”, hushed conversations about the impending fascist state, and guys wearing ponytails that turned gray a long time ago. And if you want to give those old tie-dye jeans one more trip around the block, this is the place to do it.

Alas, even from afar, ripples from another clash between HRH Donald Trump and the Resistance managed to wash ashore onto beautiful Maui. This one came compliments of Preet Bharara, U.S. Attorney for the Southern District of New York. It appears that Mr. Bharara is under the impression that Barack Obama appointed him for life to his position as U.S. Attorney. 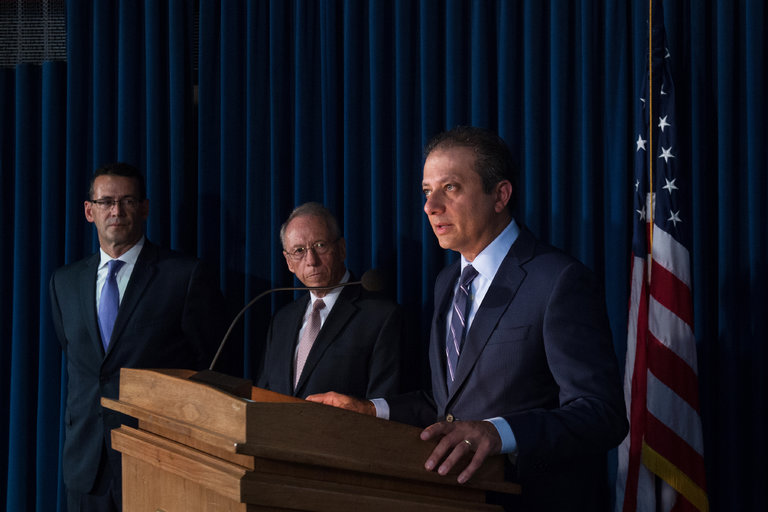 When, on Friday, Bharara’s superior in the DOJ asked for his resignation, he refused, demanding instead that he be fired by Trump. (A new and not entirely clever take on the you can’t fire me, I quit, gambit.) Anyway Trump promptly fired him. The only shame is that it took so long, because by his behavior Bharara conclusively demonstrated that he was, and remains, unfit to hold the office of U.S. Attorney, or any responsible office in law enforcement.

Let’s understand what is going on here. Preet Bharara’s refusal to resign was simply another round of the grandstanding that has characterized his tenure as U.S. Attorney. To be fair, grandstanding seems to be an occupational hazard that easily latches on to Attorney’s General and U.S. Attorneys in New York. The list of recent shrinking violets includes Rudy Giuliani, Elliot Spitzer and Eric Schneiderman. (Honorable mention goes to Chris Christie of New Jersey for his dishonorable conduct on this score.)

There is nothing wrong about a prosecutor launching a political career. That is not the problem with Bharara’s behavior. It is that that Bharara appears to have subordinated the law and the Constitutional order to advance his political goals.

It is absolutely clear that the Trump Administration was acting lawfully when it asked for Bharara’s resignation. Article II, Section 2 of the U.S. Constitution gives the President the power to nominate officers of the government who will serve with the advice and consent of the Senate. And those officers serve at the pleasure of the President. The relevant statute 28 U.S. Code § 541 reads as follows:

(a) The President shall appoint, by and with the advice and consent of the Senate, a United States attorney for each judicial district.

(c) Each United States attorney is subject to removal by the President.

Nothing in the statute says the President has to be polite. So the obvious question is: What doesn’t Preet Bharara, graduate of Harvard Law School, understand about the sentence Each United States attorney is subject to removal by the President?

If Bharara doesn’t understand what that sentence means he lacks the competence to preside over the prosecution of a parking citation. But of course, he understands it very well. Which means that while he was U.S. Attorney for the Southern District he deliberately refused a lawful order by the President. So he was insubordinate. And let’s not pretend that “asking” for a resignation is simply a request. When I was 14 my father would ask me if I wanted to mow the lawn and somehow or other I managed to figure out that he wasn’t asking a question.

So why would Preet Bharara refuse to obey a Presidential order that was unambiguously lawful, not to mention standard practice with any new Administration? Getting fired, as opposed to handing in a resignation, has zero substantive impact on the ultimate outcome. But stirring up this little drama further damages the administration of justice, which has already suffered some major hits. The wreckers include Hillary Clinton, James Comey, Loretta Lynch, Bill Clinton, Chris Christie and Barack Obama.

Well, it seems pretty obvious that Bharara decided to make himself into a (faux) hero by pretending to be a martyr for “The Resistance”. What better way to launch a political career as an elected or appointed official in the future if and when Progressives are once again ascendant.

Prosecutors in the United States have tremendous power. Their job is supposed to be to serve justice. It is not to collect convictions. Nor is it to demonize or prosecute unpopular people or advance popular political causes, as did Christie, Giuliani, Spitzer, Schneiderman and Bahrara to name a few. The list is hardly exhausting.

The awesome power that prosecutors possess requires that they be held politically accountable. The justice system is not their personal playpen. Which is why U.S. attorneys serve at the pleasure of the President, who is accountable at the ballot box.

It is hard to avoid the conclusion that Preet Bharara subordinated the letter and spirit of the law he took an oath to uphold. It is also clear that Bharara’s behavior was a challenge to the Constitutional order. Moreover it has the potential to further damage our already damaged political-legal system. Anyone who doubts this should just ask the following question. If an incumbent lost an election and refused to give up his office in the aftermath, how would his behavior in any way be different than Bharara’s?