As promised, the Trump Administration released the outline of its tax plan. Predictably and amusingly enough, it was greeted by cries of horror and anguish by Progressives. It would appear that the Trump plan would allow American taxpayers to keep more of their own money. This simply will not do. Bernie Sanders, Chuck Schumer and Tom Perez have made much better plans for it. Look at the job they have done already.

Before addressing the plan, let’s take a look at some facts, to put all this in context. First, let’s define the word “tax”. As Milton Friedman never tired of saying, federal taxes are not simply the checks that taxpayers send to the government. Taxes are equal to the resources that the government consumes. That is best measured, however imperfectly, by government spending. Taxpayer checks are merely part of the financing package. Borrowing to cover deficits is another. The real tax burden is a combination of the two. (It’s actually more, when you toss in unfunded mandates and regulatory compliance, but let’s leave that aside). 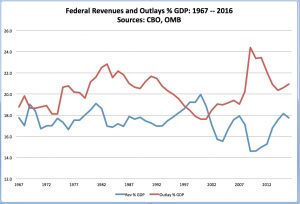 This still underestimates government resource use because it does not adequately capture things like regulatory compliance costs. Nor does it include loan guarantees or unfunded liabilities like Social Security.

This brings two subsidiary questions  to the fore. Who pays the taxes (defined narrowly in terms of revenue collections), and where is the money spent? The answer to the question of who pays the taxes is easy. It is the much-maligned rich. In 2013 (using the latest data available) the upper 1% of pre-tax income earners paid 38% of all federal income taxes; the upper 10% paid about 63%, and the upper quintile paid 88%. By contrast the bottom quintile paid a negative rate of 4%. In fact the bottom 40% got more back from refunds and “refundable credits” than they paid in.

These data are available from the Joint Economic Committee of Congress at this link.

For all the talk about investing in infrastructure, the reality is that the modern Administrative state is really about income redistribution. Specifically what we are dealing with is an extraordinarily progressive tax-spend-and-vote regime that has created an entitlement culture that is all too ready to punish success and reward failure. And it has produced plenty of policy failure.

The Trump Administration proposes to cut both individual and corporate tax rates. Individual rates would go to a 3-bracket system (10%, 25% and 35%), and the corporate rate would go to 15%. The Trump plan would eliminate most deductions, except for the mortgage deduction and charitable giving. The plan also eliminates the inheritance tax.

Democrats are up in arms because the Party of Science refuses to acknowledge that flattening and simplifying the tax code has the potential to produce enormous gains in the private sector through greater efficiency, investment and innovation. They would rather continue to subsidize the failing models of the early 20th century—like the public school system and its teachers unions, for instance. But as tax reform goes, the Trump plan gets only a B minus. That is because the Trump plan—outline really—is a change on the margin when radical surgery is needed. A much better plan would be a flat rate of about 18% for all with incomes over something like $30, 000, with no deductions or exemptions at all, including the home mortgage deduction and charitable giving. Nor should the federal government be in the business of subsidizing child care through the tax code, as the Trump plan promises to do.

But the Trump plan is better than nothing. That said, among the worst arguments against the proposal is that the plan has to be “paid for”.  Taxes represent government’s use of what would otherwise be private resources.  The phrase “paying for” a change in tax rates under static analysis (which is what the CBO is required to do) is simply an attempt to redistribute the burden without addressing the underlying problem. A real reform of public finances would reduce the total amount of government spending, privatize Social Security and Medicare, and reduce and flatten tax rates.

That’s what real change would look like. Absent that, we are still headed down the path chosen by Greece.