The season is upon us when the good and great serve up the traditional pabulum to young graduates about the importance of following their dreams. And right on cue Hillary Clinton arrived to deliver the commencement address at Wellesley College. It is an elite women’s school, so open-minded that it is willing to admit students who self-identify as women despite having XY chromosomes and the traditional appendage that accompanies those chromosomes. 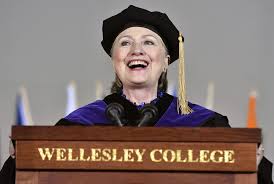 Mrs. Clinton, who has long had an arms-length relationship with the truth, received a rapturous greeting from the students. Mrs. Clinton told the assembled undergraduates that “[They] are graduating at a time when there is a full-fledged assault on truth and reason….” Mrs. Clinton, whose long career includes countless assaults on truth, decency and reason presumably recognizes another practitioner of the art in Mr. Trump. Perhaps her plaint is motivated by professional jealousy.

After all, it was Mrs. Clinton who told us she made $100,000 trading commodities by virtue of her careful reading of the Wall Street Journal. And it is the very same Mrs. Clinton who discovered the great right wing conspiracy whose arrival was coterminous with that of Monica Lewinsky. But Mrs. Clinton didn’t restrict her lying to press conferences; contemporaneous documents show that she flat-out lied under oath before the Benghazi Committee when she insisted that she thought the Embassy attack was sparked by an anti-Muslim film. And these don’t hold a candle to the gusher of falsehoods she told with respect to her e-mail server.

What is particularly interesting about Mrs. Clinton’s inability to recognize, much less tell the truth, is its eerie similarity to—Donald Trump’s. To be sure, they have stylistic differences in technique, but the underlying motivations are the same. They each lie because the truth is inconvenient or worse; the greater cause is more important, and they assume (probably correctly) that their respective supporters will stick with them regardless, pretty much like the children who followed the Pied Piper.

Which brings us back to the graduating Wellesley students, who were flattered by Clinton with rhetoric like this: “…you and I, possess the capacity for reason and critical thinking…And that free and open debate is the lifeblood of a democracy”.

Clinton went on: “When people in power invent their own facts and attack those who question them, it can mark the beginning of the end of a free society. That is not hyperbole. It is what authoritarian regimes throughout history have done. They attempt to control reality. Not just our laws and our rights and our budgets, but our thoughts and beliefs”.

Speaking of control, while Wellesley may be opened minded when it comes to chromosomes, that open mindedness comes to a screeching halt when it comes to certain ideas, particularly ones that are not suitably trendy. Wellesley College, where Mrs. Clinton uttered her banalities, is at the forefront of censoring the expression of views that are not fashionable, as the case of Laura Kipnes demonstrates.

Kipnes is a self-identified feminist (which presumably gives her campus street cred) and a full professor at Northwestern University where she teaches filmmaking. But Professor Kipnes committed the cardinal sin of standing apart from the crowd. After a Northwestern colleague Peter Ludlow was accused of sexual harassment, she penned an essay in the Chronicle of Higher Education in which she decried “sexual paranoia” on campuses, and discussed professor-student sexual relationships and “trigger-warnings”.

Two students promptly accused her of retaliatory behavior and creating a hostile work environment. The students filed a Title IX complaint arguing that her essay had a “chilling effect” on sexual harassment claims. (The Title IX investigation eventually exonerated her). Kipnes then wrote a book “Unwanted Advances: Sexual Paranoia Comes to Campus” in which she argued that sexual harassment policies do not empower women and actually impede gender equality. Unsurprisingly, the book prompted a lawsuit against her and her publisher, Harper Collins.

And what has this got to do with Wellesley College, that bastion of free speech and open debate? It turns out that when the College invited Kipnes to come to Wellesley to speak, students and faculty were outraged. Six professors who served on the Commission on Race, Ethnicity, and Equity sent a campus wide e-mail objecting to the Kipnes invitation. They argued that speakers like Kipnes “…impose on the liberty of students, staff, and faculty.”

The 6 professors went on to say “ …we object to the notion that onlookers who are part of the faculty or administration are qualified to adjudicate the harm described by students, especially when so many students have come forward. When dozens of students tell us they are in distress as a result of a speaker’s words, we must take these complaints at face value.” (See this article in Atlantic Magazine.)  Then there is also this article in Reason Magazine about the same subject.

So much for the idea of a culture of free and open debate at Wellesley. It is subject to the heckler’s veto by being held hostage to student “distress” at hearing “a speaker’s words.” And not to put too fine a point on it, this is not happening in isolation. Speakers who do not adopt the party line are routinely shouted down on the nation’s campuses, and have sometimes been violently assaulted. That’s in addition to the property damage done by rioting.

Somehow or other none of this made it into the talking points Hillary Clinton re-packaged for commencement day. Not too surprising when you consider that Clinton has been an unrelenting adversary of the First Amendment for a very long time, with her opposition to the Supreme Court’s Citizen’s United decision only being the latest sorry example. For a more complete rundown, please see “Hail to the Censor!” published by Mat Welch in Reason Magazine.

It would be a mistake to regard campus goings on as simply 4 years of expensive babysitting before students are forced to grow up in “the real world”. The “real world” is changing at the speed of light. Before long, students at elite Universities will wind up in positions of power and influence in the Universities, the Arts, the Media, Government and Business. They will carry with them the cultural attitudes they ingested while at school and those attitudes will continue to pervade the culture. After all, as Plato noted, “Those who tell the stories rule society”.

That is why the most important battles being fought today are about culture, about who will tell the stories and how they will tell them. Because it is culture that will shape the future. Which is why the current assault on decency, truth, the very idea that there is truth, reason and persuasion is so very dangerous. It is a little more than ironic, n’est pas, that the lefty protesters who routinely invoke telling truth to power, habitually deny that there is truth. Perhaps they will one day discover that lies matter, whether they come from a Clinton or a Trump.