A lot of conservatives have been scouring Donald Trump’s inaugural address in search of some encouraging signs. They are going to be looking for a long time. Not once did Trump utter the words Freedom or Liberty. Nor did he even intimate that he would attempt to reduce the size and power of an already bloated government. On the contrary, he promised to expand its use of coercion to redirect trade and investment. 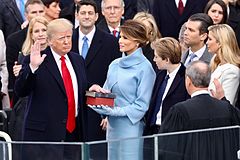 “From this day forward” Mr. Trump said, “it’s going to be only America first, America first.” He went on “We must protect our borders from the ravages of other countries making our product (sic), stealing our companies and destroying our jobs. Protection will lead to a great prosperity and strength”. If it does, it will be the first time in history.

The nonsense jam-packed into Trump’s remarks is testament to invincible ignorance, even by Trumpian standards. It is simply undeniable that global trade agreements in combination with free capital markets have enabled enormous gains in economic efficiency, making the world far richer today than it has ever been before. Economic illiterates aside, free trade has lifted billions of people out of horrific poverty. And it has greatly benefitted American consumers; particularly lower income consumers, by reducing prices for tradable goods.

It is clear that Trump sees the world as a zero-sum game. My gain is your loss. But in the real world, trade is a mutually beneficial and voluntary exchange of value that leaves both sides better off. That’s why the counterparties trade. However, in the zero-sum world of Trump, mutually beneficial trade is not possible. One side has to win and one has to lose. Which of course means that there is no such thing as free trade, or any real freedom at all. There is only power and coercion.

This Hobbesian conception of the world is the one subscribed to by Trump. It is is one in which life is nasty, brutish and short. It is a world of self-help where the strong coerce the weak. Behavioral norms do not matter. Peace is merely the interval between wars. This is the worldview that serves as a reference point for Donald Trump, the self-described counter-puncher. It is also how Vladimir Putin sees the world.

In International Relations theory this Hobbesian view is the foundation of the school of thought known as political Realism. It is distinct from Smithian Liberalism and Kantian cosmopolitanism. (Note—Realism is a term of art. American politicians who call themselves foreign policy “realists” typically  misuse the term.)

The political, economic and security architecture of the post war era is based on Smithian Liberalism. In this world, the nation-state is the primary organizational unit of world politics. Governments of nation-states exist to protect the rights of citizens. But while nation-states are sovereign over their own territory, the global system suffers from structural anarchy.

Smithian Liberalism recognizes the structural anarchy of world politics, and so it builds multi-lateral institutions to mitigate its harmful effects. That is why we have NATO, the World Bank, the IMF, the United Nations, free trade agreements and international policy regimes. The Liberal states that created these institutions embrace and protect the rule of law, property rights, individual rights and market economics. Note: these institutions are not supra-national organizations, possessing their own sovereignty. They remain instruments of states, whose behavior is guided by power, self-interest, international norms and policy values.

From the end of World War II until the present, this is the world we have lived in, with the framework implicitly guaranteed by the United States. It is without doubt the case that this Pax Americana has led to unprecedented gains in well being in the West and around the world.

Donald Trump threw a wrecking ball at all this in his inaugural address.

By threatening trade wars through an “America First” policy he threatens to tear apart the Liberal architecture of the post war era that has delivered unprecedented peace and prosperity to so many people around the world. And because of the structural anarchy of world politics, Liberal institutions rely on trust and norms. Trashing those norms is destructive, even if “only” to stake out a negotiating position.

The irony is that for all of Trump’s blather about getting rid of regulations, he is threatening to embark on one of the greatest expansions of the regulatory state in history, not to mention the use of the bully pulpit to browbeat citizens whose rights he has sworn to protect. For instance His Majesty announced he was entering the decree issuing business. HRH Trump, (note the use of the royal “We”) said, “We…are issuing a new decree to be heard in every city, in every foreign capital and in every hall of power.” He went on to say, “We will follow two simple rules: Buy American and hire American.”

Where does he think he gets the authority to command citizens to “buy American”? Let’s think about that for a moment. Then let’s think about the magnitude and absurdity of the edict and what implementing it would actually entail.

U.S. GDP is about $18 trillion, which is about 17% of Gross World Product (GWP). Trade (the sum of exports and imports) accounts for about $5 trillion in the U.S., or 28% of U.S. GDP. How, exactly, does His Royal Highness propose to go about quashing $5 trillion worth of trade, equal to about 28% of GDP without a huge increase in the power of the regulatory state? Does he seriously intend to place large tariffs on imported goods, thereby imposing a new tax on American consumers? Does he intend to give the IRS even more regulatory enforcement powers? Does he not think—to the extent he thinks at all—that foreign governments will respond in kind? How exactly is all this supposed to help?

The answer is that it won’t help anybody. The only question is how much damage these policies would do if enacted and implemented.

Donald Trump and his supporters have provided an object lesson in the dangers of combining ignorance and enthusiasm. Let us hope that the remaining adults on Capital Hill will recognize the danger and reassert Congress’s powers under the Constitution as a co-equal branch of government. At which point they should begin to dismantle the worst excesses of the regulatory state and block Donald Trump rather than acquiesce as he attempts to expand it.

Otherwise it’s going to be a long four years.

One thought on “Donald J Trump: Unleashed and Unhinged”