Ex President Barack Obama has emerged to denounce current President Donald Trump’s decision to rescind Obama’s executive order known as DACA. The decision, according to Mr. Obama, did not constitute a “legal requirement”. It was, he opined, “…a political decision, and a moral question.”

As President, Mr. Obama crafted the DACA policy. Federal courts halted the policy’s implementation when they ruled the mirror image (DAPA) policy to be in violation of federal law. In any event, President Obama weighed in via Twitter, after having said that he would comment on Mr. Trump’s actions at “certain moments where I think our core values may be at stake.”

Since Mr. Obama is a bit of an expert at knocking down straw men, let’s look for a little clarity and ask the obvious question. Just what are those “core values” we supposedly share?

Let’s take setting priorities in the criminal justice system. According to Gallup, 49% of the country wants to strengthen law and order; 43% want to reduce bias against minorities.

How about the media? While the percentage of people who trust the media has remained essentially unchanged for years (at only 37%), the distribution of trust has shifted dramatically. Back in 1999 (when overall trust was higher) party affiliation was not a factor; 53% of Democrats and 52% of Republicans thought the press got the facts about right. Now the comparable figures are 62% for Democrats and only 14% for Republicans. 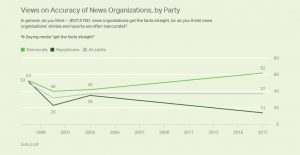 Let’s take NAFTA. While it has had overwhelming support among economists, it has always been contentious among the public. Today 48% think it is good for the U.S., while 46% think it is bad for the U.S. But what has changed over the years is that Democratic support for NAFTA has risen substantially while Republican support has plummeted. It is almost a complete reversal of party positions from the late 1990s.

What we can see in poll after poll, on issue after issue, whether with respect to policy specifics or overarching social, moral and ethical questions, Americans are deeply, and maybe irretrievably divided. The divisions are largely based on class and level of educational achievement; there is a wide divide between the views of younger generations and older Americans, and people are clustering geographically and socially with other people like themselves.

The make-up of the political parties is also changing as blue-collar working class voters are increasingly turning Republican. This turn largely reflects a revolt against the social policies of liberal coastal elites. At the same time, upper class Republicans repulsed by Trump are looking around, but still find themselves unwilling to sign on with Elizabeth Warren et. al.

So, Mr. Obama, please stop with the pabulum; let us know what values we share as Americans beyond professional sports franchises and a recently developed penchant for Tattoos. That may prove difficult because Americans no longer share a core of common values, beliefs or culture. Americans are busily retreating to their own corners and falling away from civic engagement.

None of this should be a surprise. Charles Murray, the bête noir of modern liberalism predicted it 25 years ago.

There is a certain inevitability to all this. Consider what happens when more and more policy gets made in Washington and less in local communities. It is inevitably top down and just as inevitably it reflects the interests and sensibilities of the educated elites who staff the never-ending sea of federal bureaucracies. Needless to say, this works just fine for educated elites who live on the coasts. But it stomps out opportunity and upward mobility for the middle and lower classes, especially the ones trapped in a public school system that defines failure.

Not only that, university, media and cultural elites have relentlessly attacked the values of Middle America and traditional civil institutions for decades. You know, the Obama bit about the people bitterly clinging to their guns and Religion. Then there is the current fashion of denying that the difference between men and women is rooted in biology; gender is really only a social construct. So it is vitally important to fundamentally transform racist, sexist, homophobic, Islamophobic and capitalist America.

Basing policy arguments on an appeal to common values, to “who we are as Americans”, is a waste of time. Those common values and cultural understandings collapsed a long time ago after years of steady assault. They are not coming back anytime soon—if at all.