It appears that although Hillary Clinton got quite a bounce from the Trump Groping scandal, Trump’s poll numbers may be stabilizing, and even coming back a bit. To be sure the odds of a Clinton victory are in the vicinity of 9 to 1; Clinton still has an advantage in the battleground states, and Trump’s path to 270 electoral votes is narrow. But after enduring two of the worst weeks in campaign history, Trump is still standing, however tenuously.

On the other hand, Trump could lose Pennsylvania, Michigan and Wisconsin, but still carry Florida and New Hampshire. In either scenario, the remaining and decisive state would be none other than Utah.

Here is where it gets really interesting. Utah is very red, and it has a very large conservative Mormon population that is decidedly uncomfortable with the way Trump has conducted himself. But Utah is getting increasingly comfortable with Evan McMullen who is running as a third party candidate. He is an ex CIA official, and former chief policy director of the House Republican Conference. He has a conservative platform and he is a Mormon. Recent polls have put McMullen, Trump and Clinton in the low to mid 20s, within the margin of error.

If McMullen were to carry Utah, there are at least 3 or 4 plausible scenarios that would deny any candidate the 270 electoral votes needed to win, thus throwing the election into Congress. (Please see the Electoral College Maps below outlining possible tie scenarios). Were that to happen the newly elected Congress would decide who would be President and the Senate would choose the Vice-President. 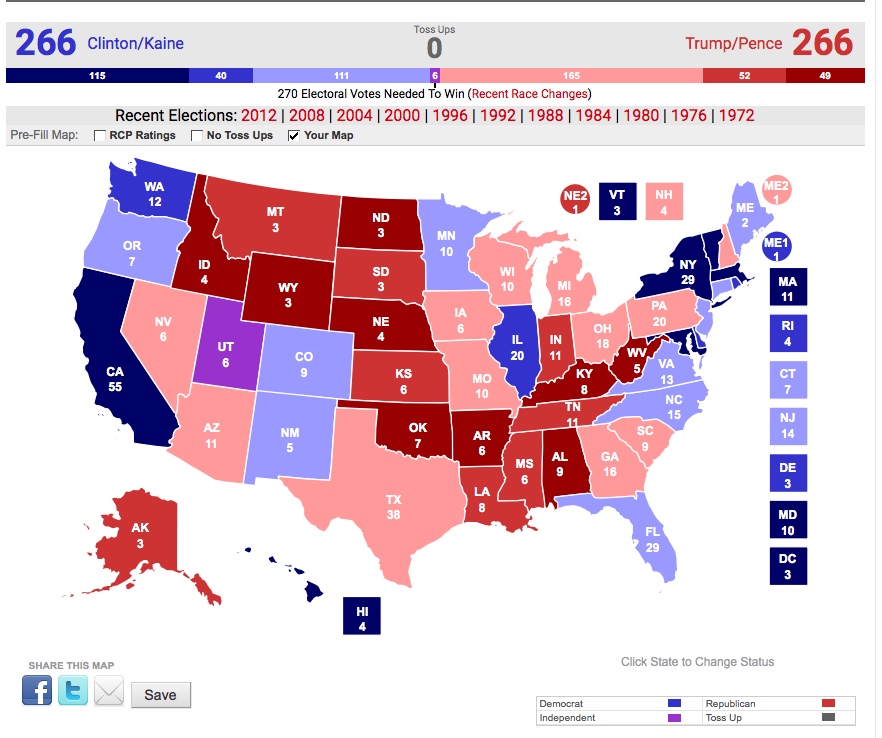 But it isn’t clear that the Republicans would necessarily vote for Trump, given Trump’s open declaration of war against the party. It is entirely possible that the Republican House could pick someone like ex Secretary of Defense Bob Gates, or Governor Kasich of Ohio, or former Governor of Indiana Mitch Daniels. Meanwhile, the Senate could vote to make Tim Kaine VP, thus creating a sort of center right national unity government.

None of these scenarios are likely. But they are not impossible either.