The front page of today’s New York Times carries the headline “Trump Falsely Says Claim of Hacking Came After Election”. And that is true enough. Just as it would be true enough for the Times to publish the headline “Hillary Clinton Falsely Claims Not to Have Sent Classified E-Mails.” Or “Hillary Clinton Falsely Claims She Turned Over All Her Work Related E-Mails.” Or, Hillary Clinton Claims, well, you get the idea. So it appears that the Times isn’t so much concerned with lying as it is concerned with who is doing the lying.

And on that subject, ironically enough, the Times points out that the director of national intelligence, James R. Clapper Jr. formally blamed Russia on October 7 for hacking the DNC a month before election day. That, by the way, is the same James R. Clapper Jr., who perjured himself before Congress. When Senator Ron Wyden of Oregon asked him point blank if the NSA collected any type of data on millions of American citizens, Clapper’s answer was: “No sir.”

When he was confronted with his lie shortly thereafter he said that he gave what he considered to be the “least untruthful” answer he could.

Which brings us to the matter of Edward Snowden. 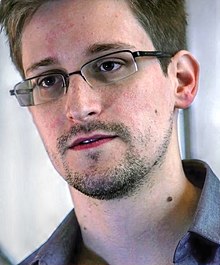 Edward Snowden was hired as an NSA contractor in 2013, over three years ago. By June of 2013 Snowden had leaked thousands of classified documents, and by June 23, 2013 he had hightailed it over to Russia from Hong Kong to escape the U.S. Justice Department. As of now he still lives in Russia where he has been granted temporary asylum. So Russia has been harboring a U.S. fugitive who leaked thousands of classified documents to, among others—the New York Times. And that very same New York Times acts surprised that Russia would try to interfere in U.S. domestic politics. What did the Times think Russia was doing then?

Note too that there is no one on the planet who has any evidence whatsoever that Russia’s evidence had an impact on the outcome. Homeland Security Secretary Jeb Johnson said there is “no evidence” that any “bad actor” actually changed the ballot count in the presidential election. And not to put too fine a point on it, the information that was released that is the subject of the hacking complaints wasn’t false. It was factually correct.

Hillary Clinton and Company did stack the rules against Bernie Sanders in the primaries. Donna Brazile was feeding CNN’s debate questions to Hillary Clinton ahead of time. Hillary Clinton’s senior staff did mock Catholics and Catholicism behind closed doors. John Podesta did ask Clinton to call “needy Latinos.” And so on.

The real question that should be on everybody’s mind is not: did Russia attempt to interfere with the election. Of course they did. The real question is: how could the White House be so incompetent that they fell asleep at the switch? And why are they only waking up now? Edward Snowden, who might know a thing or two about hacking, has been sitting in Moscow for 3 years after having been granted temporary asylum. And it is only now that the White House appears to consider that Russia might have been interested in the confidential files maintained by the Presidential campaigns of Clinton and Trump? Seriously?

It is entirely possible, if not probable, that the Russians also hacked into Hillary Clinton’s private e-mail server, and that they have in their possession the supposedly personal e-mails that she ordered destroyed. The ones that were under subpoena, by the way. Those e-mails could be the ones that contain the really interesting information. But we will never know. Unless Vladimir Putin decides we should.